I attracted my very first internet troll on Twitter a few weeks back and very proudly announced it to my friends.  One of them, quite familiar with the rather strange medical stuff I tend to (over)share (sometimes over dinner) suggested that my troll may have been attracted by my scatological posts.[1]  Now, until then, I hadn’t realized that I’d told and retold so many medical history poop stories to my friends.

Now, internet world, you too will have the opportunity to see what it’s like to be the friend of an early modern medical historian with a questionable sense of humour.

I shared the first of these on Twitter recently.  I’m including it here again because it’s kind of awesome.

The Pearle of Practise (1594) is simply amazing and features some of the most fascinating medical receipts I’ve ever had to pleasure to read.

Indeed, one of my fondest research moments was the recent rediscovery of my notes on the treatise that read: “random stuff about hens for belly etc.; 80 of eels for deafness, glue, ulcer; barbills to vomit and purge and bees for baldness; 81 frogs for legs and children and heat in blood and centumpedes for stitch in side and crickets to pee.”[2]

The work was collected and printed by James Fourestier, a physician and clergyman who was twice examined by the College of Physicians and deemed wanting.  Indeed, the College thought his medical knowledge “absurd and inadequate.”  Fourestier wrote the book as a thinly veiled advertisement for his sale of John Hester’s (a deceased distiller) medical formulations.

One of the many medical treatments that caught my attention years ago is found on the bottom left of page 44 here and states that “Diuerse Souldiars in the warres haue beene cured thereof [of diarrhea/the flux], by setting their fundament in warme Horse dung.” 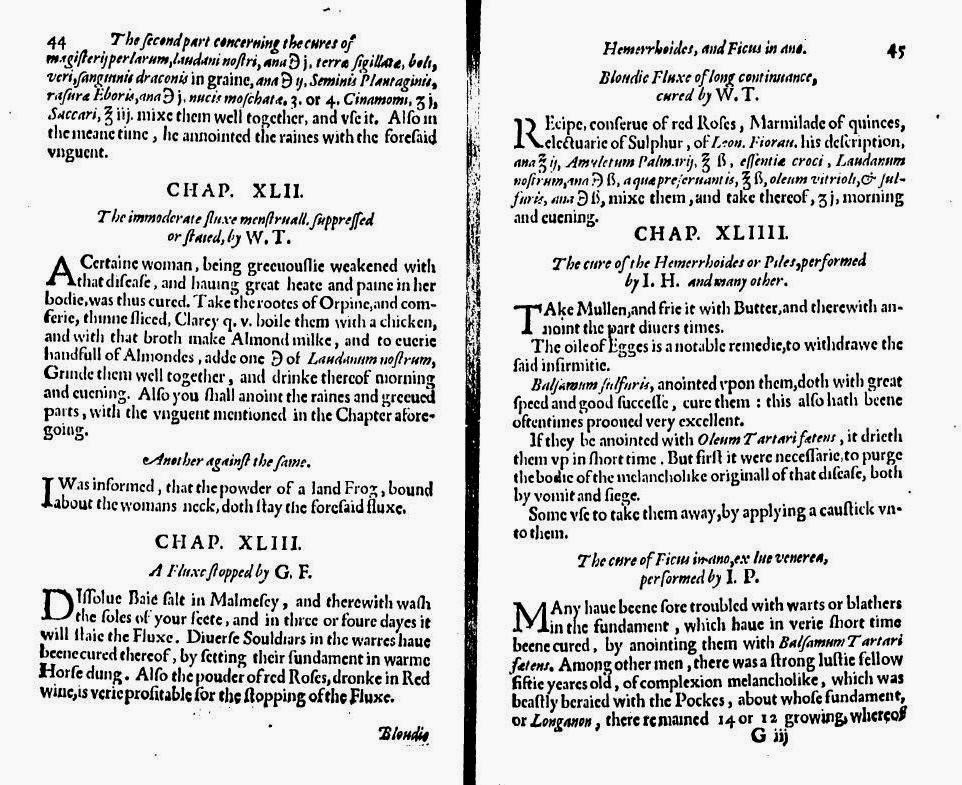 Now, I’m sure many of you have seen this condensed medical history timeline that starts at 2000 B.C. with “here eat this root,” cycles through prayers, potions, snake oil, pills, and antibiotics and then in 2000 A.D. declares “that antibiotic is artificial, here, eat this root!”

There’s a “medicine is culturally constructed” statement in there that’s very important, but that’s a blog entry for another time.  For now, I want to focus in on some gorgeous juxtaposition.

Have you heard of fecal transplants?  Because we do that now.  It took 400+ years, but we’ve refined the idea expressed by Hester/Fourestier here.  Rather than “like curing like” in the Paracelsian way, we have the repopulation of healthy bacteria through enemas.

There seems to be some problems deciding how to regulate fecal transplants.  This is discussed here and on this advocacy site.

A dear friend of mine recently had a painful bout of shingles.  If only I had this cure months ago!  Though, how/where could we collect the dove’s excrement here euphemistically referred to as “dirte”?

One wonders if the combination somehow soothed the burning pain of shingles.  The author, Thomas Dawson, here promises that a bout of the shingles would be cured within 3 plaisters or over the course of 9 days.  To put that into perspective, an outbreak of shingles lasts generally from 3-5 weeks and can be shortened with antiviral medicines, steroids etc.

For the shingles a remedie.

Take Doues dirte that is moystye, and of Barly meale heaped halfe a pound, and stamp these well together, and do therto halfe a pinte of vineger, and meddle them together, and so laye it to the sore colde, laye wall leaues thereupon, and so let it lye three dayes vnremoued, and on the third day if neede require, laye thereto a new plaister of the same, and at the most he shalbe whole within three plaisters.

Richard Hawes’s The Poore-Mans Plasterbox (1634) was meant – at first glance – to provide low cost medical advice to the poor who could afford neither a physician, nor a surgeon.  Despite the title, however, Hawes included some recipes that seem a bit pricy and made some distinction between those with bruises who could & could not afford “a bed to sweat in.”  Pictured is his description of a truly horrific cure (A Good Remedy for a Poore Man, pg 10). 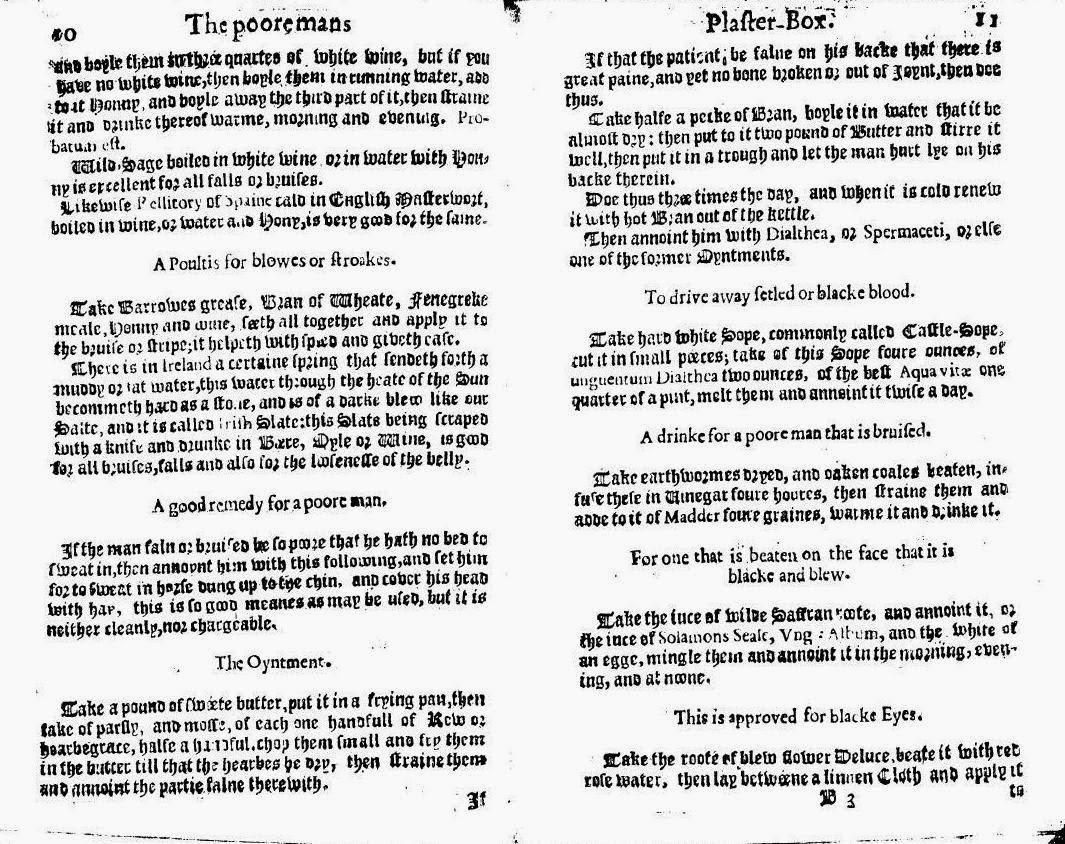 Hawes himself, at least, recognized that this was a terrible option and stated “this is so good meanes as may be used, but it is neither cleanly, nor chargeable.”

4. Didn’t Anyone Think of the Smell?

Well, yes.  In interesting ways.  Andrew Boorde’s 1550 treatise on how to set up one’s home stated that “no fylthe nor dunge be within the courte, nor cast at the backesyde, but the dunge to be caryed far from the mansion.”

Alright, so living near excrement was unhealthy and noisome but it was an important medical treatment.

William Salmon, a renowned 17th century quack doctor, related the story of a woman who gained a fortune by this panacea:

Unlike the topical remedy  prescribed above, the tincture Salmon mentioned was meant to be ingested.

Interestingly, Salmon went on to explain that the tincture was not at all malodorous and repulsive because:

By reason it is extracted from Cows-dung, it has a pretty kind of sweet scent, as if it was perfumed with Musk, or some other odoriferous thing.

A turf of fresh earth often smelt to; or to receive much the sent of Cow-dung is good and necessary for hot blooded people.

Forget shaving.  Or waxing.  Or plucking.  Or any of that stuff.  Do you have a cat?  You should get a cat.  And something that lays a lot of eggs.

Take the shells of fifty two Eggs, beat them small, and still them with a good fire, and with the water anoint your self where you would have the hair off: Or else Cats Dung that is hard and dryed, beaten to powder and tempered with string Vinegar, and anointed on the place.

BONUS: Wellcome MS MS.7073/78 is a collection of medical receipts & directions by Caleb Lowdham, an Exeter surgeon.  Here's his take on the "juice of horse dung" as a panacea. Taken from the digitized Wellcome collection. 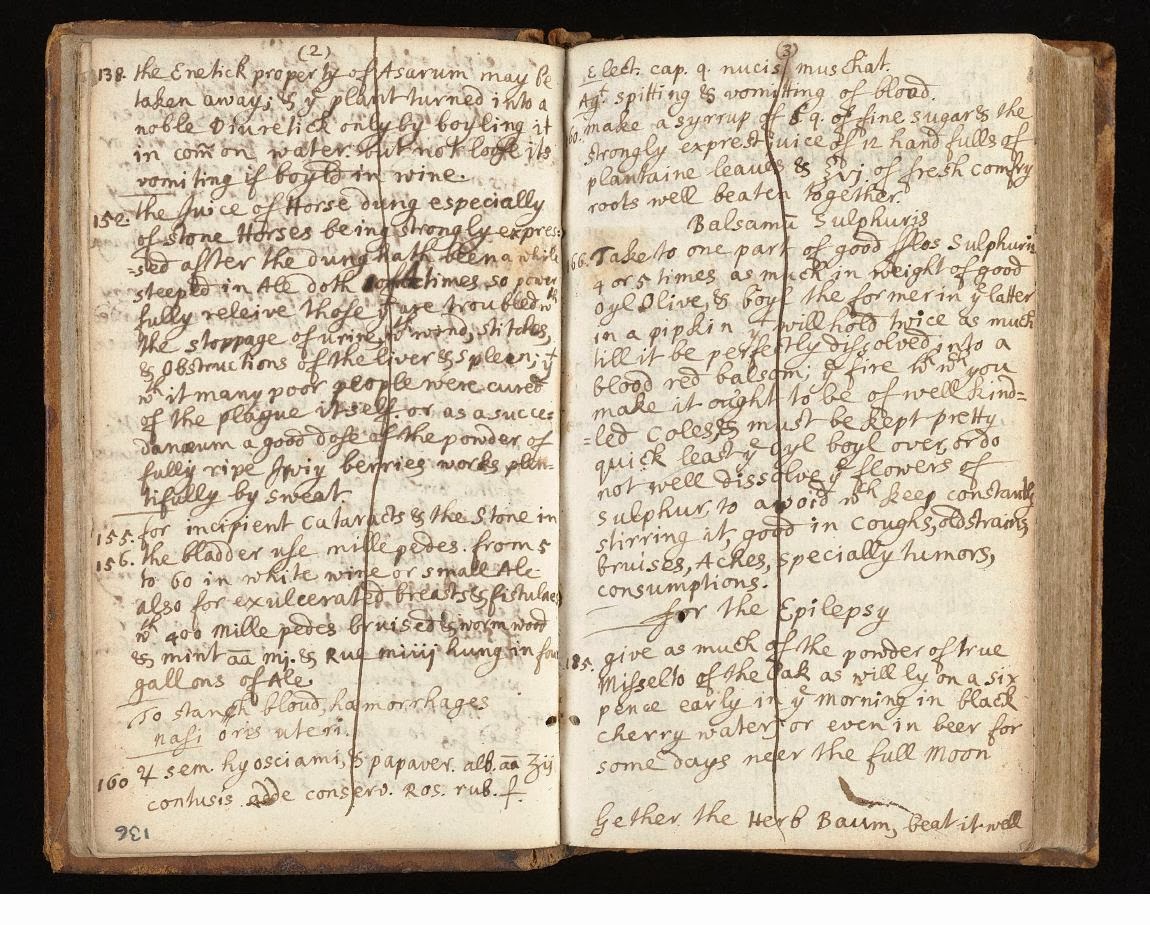 If anyone is brave enough to try any of these recipes (not that I advise it), please do let me know here or on Twitter.  I'm @medhistorian

[1] To date, I may have shared a maximum of 2 medical history poop stories via Twitter :P
[2] I have no idea what my undergraduate self thought as she scribbled that down, likely tucked away in the old history of medicine section at Mac’s Health Sci library.

Posted by Samantha Sandassie at 14:55