Drinking Bath Water – No, Not That Kind!

“Lady Russell's composed mind and polite manners were put to some trial on this point, in her intercourse in Camden Place. The sight of Mrs Clay in such favour, and of Anne so overlooked, was a perpetual provocation to her there; and vexed her as much when she was away, as a person in Bath who drinks the water, gets all the new publications, and has a very large acquaintance, has time to be vexed.” – Jane Austen, Persuasion

I’ve wanted to write something on medicinal waters since my MA year.[1]  I, in fact, proposed it to my environmental history prof as my research paper topic for his course.  Alas, we were walking and talking in a crowded space and he misheard me.  His face lit up, I ran with it, and soon we were discussing my project on municipal water.

All’s well that ends well and all that, I suppose.  While early modern ideas of potable water will make an appearance today, I’m going to focus on the medicinal use of mineral water.

Almost everyone has heard the phrase “taking the waters,” but what does it mean?  What “waters” were these people “taking” and how were they “taking” it?  As the excerpt from Persuasion hints, by Austen’s time, this involved relatively wealthy or fashionable people imbibing mineral water from spa towns such as Bath.

Long before Austen and her Lady Russell, ancient Greeks identified and made use of mineral waters medicinally.  As Roy Porter noted, “the bodily humors could be heated, cooled, moistened, or dried by a combination of hot and cold baths; thermal baths soothed chest and back pains in pneumonia, and promoted the secretion of urine; cold douches relieved swellings and painful joints; and aromatic vapor bathes were advised for female disorders…The waters were also drunk, substituting for wine and meat at the sign of impending illness, as one of Asclepiades’ ‘common aids’; cold water was recommended for those with fever.”[2]

The Roman discovery of Bath, then, led to some excitement.  The modern exhibit of the baths quotes the 3rd century writer Gaius Julius Solinus’s The Wonders of the World in stating “in Britain are hot springs adorned with sumptuous splendour for the use of mortals.  Minerva is a patron goddess of these.”[3]  Then known as Aquae Sulis, and now known as Bath, the town is home to a plethora of Roman artefacts in addition to the baths themselves.

The original bathing complex was huge and even included a temple to Minerva.  Later additions include the medieval King’s Bath and the 18th century Pump Room (which accompanied other restoration projects).  Further modifications were made throughout the Victorian era. 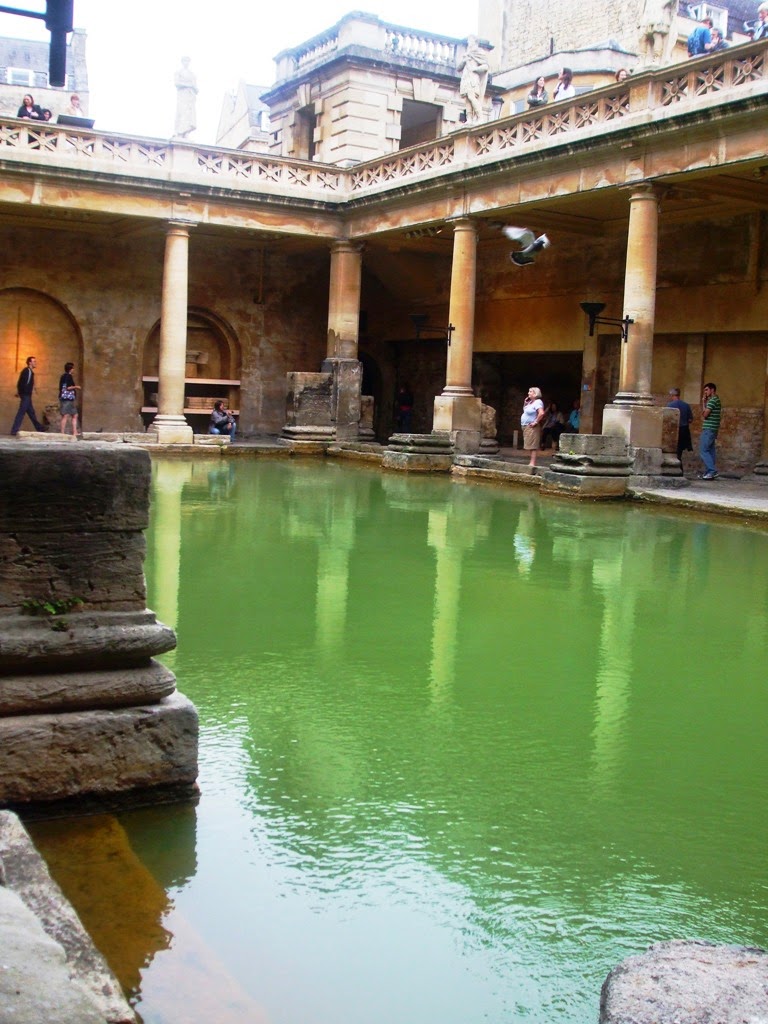 Despite a millennia of changes, one thing remained the same – the people’s obsession with, and reverence for, the mineral water available.  Take a look at the water.  Not particularly potable-looking is it?

In general, the early moderns used a few sensory tests to determine whether water was potable.  It needed to be clear to the sight and lacking in visible sediment, lack a strong scent, not flavourful to the taste, and thin enough that, when pouring, it made a pleasing splashing sound to the ear.[4]

Medicinal waters never met the sensory standards for water as a general beverage. Rather, they were selected especially for their mineral content and purported medicinal virtues – which meant, generally, a very unpleasant flavour.  Indeed, the physician William Turner wrote that the Bath water’s “chefe vertue and streingth after my iudgement is brimstone.”[5]


Early modern Bath allowed visitors to bathe in the warm water and even procure bottles of the mineral water for drinking.  This latter water was, of course/supposedly, collected from an area where visitors did not soak.

Bath water was not to be imbibed with reckless abandon.  Understood as a medicine, its properties were the subject of many 17th century treatises and guides.  Authors noted repeatedly that using the bath water required some sort of dietetic regime and supervision by a medical practitioner.

One such physician wrote “that none should wantonly, and with contempt of all Dietetical Rules, make use of those Mineral Drinks; but that all Circumstances relating thereto, should be conformable to Moderation and Temperance.”[7]

Likewise, Thomas Guidott’s A Quaere Concerning Drinking Bath-water (1673) discouraged immoderate consumption of mineral water.  Not all mineral waters were created equal and some contained “noxious Ingredient[s]” such as mercury, lead, and gypsum that were not meant for internal use.[8]

Of Bath’s sulphurous or brimstone-filled waters, Guidott suggested that “with some Cautions in the use thereof, they may be potable, though not so adviseable as some other Mineral Waters are.  And this is the most moderate Decision I can give of that part of the Question that concerns the Security of the using the Bath-Water as a Drink.”[9]

Guidott’s caution was due, primarily to the balance of minerals in Bath water.  It contained primarily sulphur (not great for you),  bitumen (not good for you), and nitre (good for you).

Naturally, Guidott concluded that drinking the Bath waters was something to be done only upon and under the advice of a physician.  Moreover, he continued, not just any physician, but one who knew well the content of the mineral water and about the patient’s ailment.[10]

This hinted toward, of course, the sort of physician who lived and worked near the mineral waters they prescribed.  Someone (not shockingly) like Guidott who had set up a successful practice at Bath.

The popularity of mineral waters did mean some interesting marketing practices.

John Halhed, a self-proclaimed vintner and victualler argued that his London Spa was superior to the Tunbridge waters.  Both iron-filled, the London Spa, had apparently been declared by Robert Boyle to be the “strongest and very best of these late found-out Medicinal Iron Waters.”  Indeed, Halhed continued, the Royal Society and even many members of the College of Physicians believed in the water as “the more speedy and more effectual way of curing…many Distempers and Diseases.”[11]

In any case, the Holt mineral water was presented as a sort of panacea, curing everything from the King’s Evil (scrofula) to cancer to poor appetite.

Eyres, who apparently run some sort of business called the Golden Tea-Cannister, sold rum, brandy, chocolate, and also Bath, Bristol, Holt, and Pyrmont mineral waters.  A true pharmacy of medicinal waters, Eyres guaranteed that his water would be both “fresh” and “genuine.” 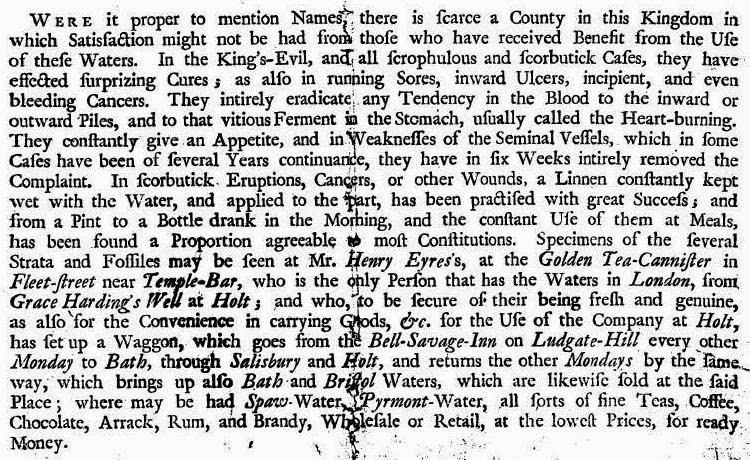 So how were these waters used by physicians?

Thomas Sydenham’s Compleat Method of Curing (1695) recommended two types of mineral waters as the last resort when treating hysterical women or men with hypochondria.  After trying and failing various other milder medicines, Sydenham suggested first waters full of iron, and if that too failed, to use “those sulphureous, such as are the Bath-Waters.”[12]

Sydenham here suggested a combination of bathing and imbibing the waters – along with other medicines – and being aware at all times of its effects. 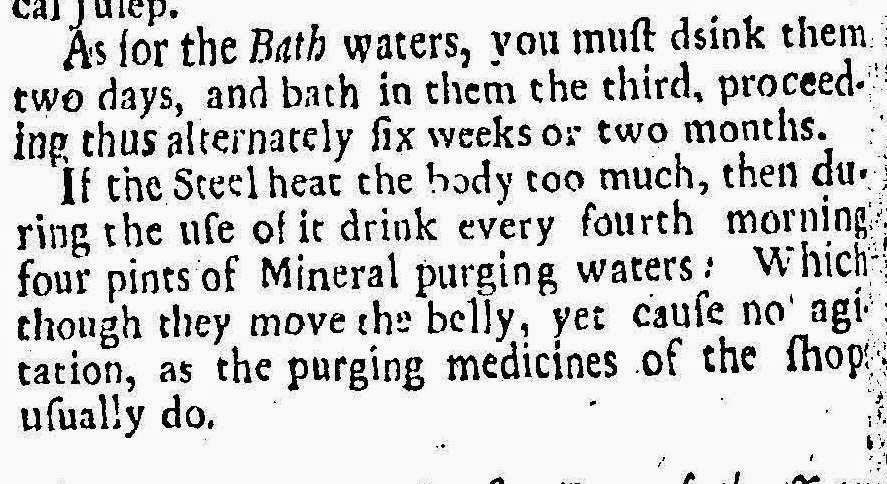 What would drinking mineral water do?

A very ill Henrietta Maria wrote to Charles I that her course of waters had little effect on alleviating her symptoms:

“I arrived in this place three weeks ago, much harassed by the long journey I had taken, having been an entire month always travelling, in very violent heats; since my arrival, I have had a pain in my breast, which was obliged to be lanced, but of which I am now cured, as I hope, and have already drunk the waters ten days, and shall continue five more, and then I shall bathe, and take the douche bath, which is in English, "pump." I begin to hope that I shall not die, for I am already a little better, though this numbness still continues, and a redness like the measles, which has covered my whole body for three months, does not diminish. Still my head is a little relieved, and my body is not so large as it was.”[13]

Mary and Edward Clarke were close friends with John Locke and Mary was being advised medically by him.  In a letter to her husband Edward that was forwarded to Locke, Mary advised that her ailment was involved severe pains, menstruation, and her emotions and that her emotions were hindering her recovery.
As she wrote:


“I find when any thinge doss afectt and disturbe my mind, it doss thuss refenge it selfe upon my body, beyond the common rate that it dose att other times, and by thiss meanes keeps me very leane and low sperrited, and hindred me as I beleve from Gathering that stranth by the bath waters as mr lock expected.”[14]

Mary described her physical reaction to the bath water thusly:

“Gave me a stoole or 2 in the drinking of them [that is Bath water], According as I mannaged them, which was thuss, the warmer and quicker I dranke them the more they wraght that way, for when I dranke them Coole, and leasurely, which mr Locke advised If you remember to keepe them from fleying up in my head, then I observed they wrought alltogether by uring, but when I filled my selfe soe full as I was redy to burst, but was sure to Give off without Vomitting, then they Certainly Gave me a stoole or 2, and some times three, but that was not Common, which is all I can say as to the bath waters.”[15]


Mary’s letters to her husband Edward from August to October 1694 give a bit more detail about her – frequently hesitant and unhappy – experience of taking the waters at Bath.

On 20 August, Mary wrote that she had drunk the bath waters  “and they pass very well.”[16]

The  next month, however, Mary noted that she had stopped drinking the waters for some time – the mineral water causing her to feel almost drunk when consumed in the morning and after a poor night’s rest.

“I have drunke noe bath waters since the first barell that was brought the day before you went, but now I have gott another, but have not drunke any ye morning for I found the last when I did not sleepe well anights was very apt to fly up to my head and made me just like one drunke all confusion, and the roome would seeme to run round so that I was forst to catch hold of anything neare or fall.”[17]

In October, Mary wrote to Edward that her kidney pains continued and that she had now developed stomach pains as well.  In fear of her worsening symptoms, she wrote that she was beginning again her course of waters even though the taste was terrible!

“I have my bottle and glas brought and set in the gallery window by my chamber wheare I walk and drink them with a great deal of plesure though all heare will have they have a nasty tast and do stinke.”[18]

Locke’s letter to Mary  in November of the 1694 highlights the importance he placed on continuing the practice.

“I know not what you intend by the remainder of the waters you have by you which you intended to drink, as if you did it that those might not be lost. I measure not your drinking of them by the number of your bottles but by the good I conclude they will doe you. And being of an opinion noe thing can be better than they are for you I would have them continued without any interruption for six weeks or two months togeather, soe that what went before you left them off goes with me for noething.”[19]

Mary’s reaction to the Bath waters seem quite dreadful.  Dizziness aside, however, the water’s purging quality was likely its most important function.

Unfortunately, Mary continued to be plagued by ill health.  While her pains subsided, her legs soon swelled excessively and she was once again seeking medical treatments. This time, however, Locke did not suggest the waters at Bath.