The Hare and the Tortoise (plus some Oil of Fox)


The human-animal relationship is incredibly complex.  Animals are, at turns, companions and friends, a threat, a tool, and food supply.  The relationship between man and beast in early modern England was no less multifaceted.[1]

The horse, for example, was invaluable for both labour and transport.  They could be associated strongly with military valour and the upper echelons of society, but were also mistreated and viewed with some contempt.[2] Thomas Hamill noted that cockfighting was portrayed as both a sport and as a mere extension of animal husbandry.[3]  Bears and bulls were acknowledged as fearsome, yet bear and bull-baiting were common enough London spectacles.

I did go to Shoe Lane to see a cocke-fighting at a new pit there, a sport I was never at in my life; but, Lord! to see the strange variety of people, from Parliament-man (by name Wildes, that was Deputy Governor of the Tower when Robinson was Lord Mayor) to the poorest ‘prentices, bakers, brewers, butchers, draymen, and what not; and all these fellows one with another in swearing, cursing, and betting. I soon had enough of it, and yet I would not but have seen it once, it being strange to observe the nature of these poor creatures, how they will fight till they drop down dead upon the table, and strike after they are ready to give up the ghost, not offering to run away when they are weary or wounded past doing further, whereas where a dunghill brood comes he will, after a sharp stroke that pricks him, run off the stage, and then they wring off his neck without more ado, whereas the other they preserve, though their eyes be both out, for breed only of a true cock of the game. - Samuel Pepys, Diary, Monday 21 December 1663.

Setting aside these interactions and the use of animal flesh as food, the early moderns also used animals/animal parts in medical treatments involving both ingestion and external application.

The former is especially understandable given the humoural understanding of disease.  Dating back to Hippocrates and Galen, humoural theory conceived of diseases as an imbalance of the four humours – blood, phlegm, black bile, and yellow bile.  Animals, too, were composed of these humours in varying amounts and consuming them would, thus, affect one’s own humoural balance.  Then, as now, there was a clear understanding that one’s food determined one’s health.

Robert Lovell, for example, wrote that older deer (buck) flesh was cold and dry “and full of grosse humours” that could be corrected for eating by the addition of “Butter, Pepper and Salt.”[4]  In contrast, when young, deer was a “wholesome Meat, Having no bad juice of themselves.”[5]

In addition to dietetical advice, Lovell consistently included medicinal uses for these animals as well.  For instance, of the pig – which he deemed “the best of all fleshes” – he wrote that warm young pigs (one assumes a section of flesh?) applied to a bite draws out venom and decreases pain while the brain of sow applied to breasts encourages their growth.[6]

These medicinal uses are strange, fascinating, and horrifying at turns.  The use of boiled, newly whelped puppies to cure gunshot wounds are among the latter.[7]  Today, though, I’m going to stick to the medicinal uses of the hare, the tortoise, and the fox.

For those of you who didn’t get that reference right away, the Hare and the Tortoise is one of Aesop’s fables.  The fox was the judge and organizer, the hare was the arrogant one who lost, and the tortoise taught us all to plug steadily along to win the race.

Foxes are handsome creatures, supposedly the embodiment of slyness and cunning.

Lovell wrote that fox flesh was hot, difficult to digest “of exceeding bad aliment, being unlike mans nature, and stinking.”[8]  These traits, however, did not discourage the early modern English from using them in medicines. 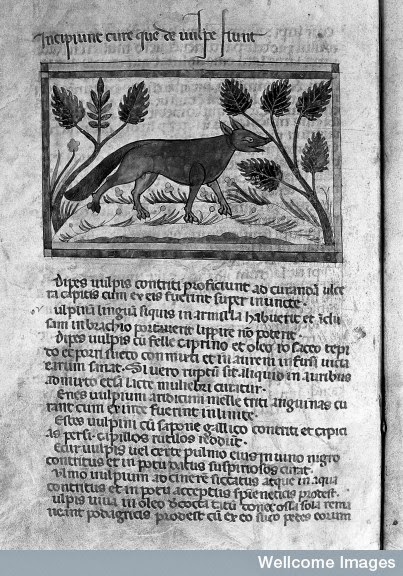 In the tradition of “like curing like,” dried fox lungs were thought to be good “against the diseases of the lungs” while the liver “helps the Hepatick and Splenetick.”[9]  Dried fox blood was thought to heal urinary or bladder diseases while imbibing or anointing with fresh blood was though to be more potent.[10]

“Oil of fox” pops up on numerous occasions in both medical and surgical treatises and seems to have been something of a panacea.

The fattest Fox you can get of a middle age. and well hunted, and newly kild, and garbish him quickly, and fley him, and cut him in small pieces, and break all his bones well, then boyle him in White wine and Spring water, six pound.

Let him boyle thus untill halfe the liquor bee wasted, very well scumming it at the first boyling, then put into the vessell.

Then boyle it againe untill almost all the water be consumed, and then powre into it eight pound of water wherein hath beene well boyled one good handful of Dill, and another of Time, then boyle them altogether with an easie fire untill all the water be wasted, then straine it, and separate the oyle from the moysture, and keep it for thy use.[11]

Oil of fox was, in particular, though to heal “the diseases of the sinews, Convulsions, and aches of the joints” by external application.[12]  In treating the palsy, one physician recommended especially anointing with oil of fox after bathing in spa waters of brimstone or nitre.[13]

Lovell wrote that hares were hot and dry, to be eaten with many spices and especially by old men and those of a cold temper.[14]  Physician John Archer concurred that hare was a melancholic meat, that was in fact, best served boiled.[15]

Johann Schroder’s Zoologia lists 17 separate parts of the hare that were thought to have a medicinal use.  These included everything from testicles, to dung, to blood, and even ashes.

Uses ranged widely – from the magical to the medical.  The fat of a hare “put upon the breast of one sleeping, causeth them to tell whatsoever shall be asked them.”[16]  Medical uses included rubbing hare’s brains on the gums of children help with teething to anointing pimples with its blood.

The animal’s had the practical usage of stopping the flow of blood.  Martin Browne, a 17th century surgeon, used small balls of the hare’s hair dipped in egg whites and sugar to stop nosebleeds.[18]
For the most part, however, hare seems to have been used to cure the stone and related urinary or bladder issues.  Schroder, for example, wrote that: “the ashes is made of a whole Hare burnt (that is best which is taken in the spring) or of the whole skin incinerated.  It is most excellent medicine in the Stone.”[19]  In addition to the ashes, he noted that the dung, kidneys, and testicles also helped those suffering from the stone.

This hare powder, for example, was touted as good for the stone and strangulation.

Tortoises were a bit of a mystery to the early modern English.  A 1668 article in the Transactions of the Royal Society reveals that one Dr. Stubbes vivisected a tortoise to test one Mr. Lygons’s assertion that a tortoise had three hearts.  Stubbes, of course, found it to be false.  The Transacations describes Stubbes as “that Learn'd and Inquisitive Physitian,” but his vivisection observations make the Caymans sound more like the island of Dr. Moreau.


I repeat only one of the mildest of his comments: “If you hurt them on shore, as they lie on their backs, the teares will trickle from their Eyes.”[20]

Because they are not native to England, Lovell focused primarily on how other cultures used the animal.  In the “Indies” as Lovell put it, tortoises were eaten dressed with saffron and other spices.  While in Africa, he noted that the head and feet were boiled and eaten to help the “spleen and epilepsy.”[21]
Schroder recorded that the shank of a male tortoise, cut under the waning moon, and sowed into bags of goat skin should be tied to a patient’s “members, so that the right shank of the Tortoyse answer to the right thigh of the patient, nad the left to the left, and in the like manner, the right shank of the former leg be applied to the right arm, and the left to the left” in order to cure one’s gout.

John Durant (1697) also noted a medico-magical use for the shell of a tortoise egg – when worn, he wrote, “you shall never have desire for Venery.”[22]

Alright, that’s it for the medhistorian version of Aesop’s classic fable.  I’m off to go cuddle my cat and reassure him that we won’t be using his blood to cure the falling sickness or shingles.[23]

Let me know what you think here or on Twitter – I’m @medhistorian.