Female medical practice was not limited to the home or practicing on family members and neighbours.  Official recognition and appreciation of female lay practice was tied often to practice on behalf of the poor.  Diane Willen has found that women provided medical poor relief in Norwich, York, and London hospitals by performing nursing duties and curing skin diseases thought often to be under the aegis of surgery.[1]

Women’s surgical practices were put to the test during the English Civil War as wounded and sick soldiers outnumbered the surgeons attached to their regiments.  Thomas Harrison petitioned Parliament for £5 “for 50 Menes dyett being wounded at Naseby fight yt Came to my wife for Cure.”[2]  Dorothy Painter of Richmond was recorded as relieving “maimed soldiers” while another woman named Mary Searle was “active in looking after the sick and wounded Parliament soldiers.”[3]

“besides the plaisters or balsam I aplied, I gave every one of them as much with them as might drese them 3 or 4 times, for I had provided myselfe very well of things nesesary for that imploymentt, expecting they might bee usefull.”

Several of the wounds she treated were quite severe, one man’s “head was cutt so that the [blank space] was very visibly seene, and the watter came bubbling up.”[4]  One can only assume that this head wound had exposed the man’s skull or even brain tissue.

There are numerous accounts of upper class women who practiced physick and surgery.  Lady Margaret Hoby acted as both physician and surgeon, in 1601 attempting to cut the imperforated anus of an infant brought to her by a local tailor.[5]  Lady Anne Fanshawe’s mother and Robert Burton’s mother were both renowned for their charitable medical and surgical practices.[6]

Barred from medical school and only infrequently found in surgical guilds, women gained initially their medical knowledge through oral means.  In some cases, such as those of Lady Anne Clifford and Alice Thornton, women were taught the healing craft by their own mothers.[7]  Other women were taught by their husbands and continued practicing once widowed, while others learned from other male family members: Nicholas Ferrar taught his nieces some surgical skills.[8]

With growing literacy rates, manuscript and printed texts joined the oral tradition as a mechanism through which women learned to practice physick and surgery.  Manuscript receipt books reveal that women collected and wrote down information and recipes related to household management, cookery, physick, and surgery.[9]

Overall, these receipt manuscripts are strikingly similar to the popular general health treatises published throughout the period.  Both manuscript and printed text were part of a movement to collect and organize household knowledge in an accessible way.

Treatises were reprinted frequently over the period and, like John Partridge’s The Widdowe’s Treasure (1595) and Gervase Markham’s The English House-Wife (1637), contained a mixture of medico-surgical, cookery, and veterinary information along with corresponding recipes.  Receipts were typically indexed for ease of reference and grouped in general sections that separated physick and surgical receipts from those of cookery, perfuming, dyes, artificial gems and the like.  Again emphasizing their similarity, authors of popular health treatises aped the structure of receipt books in order to suggest the authority of the good housewife.

By the Restoration, Hannah Woolley had begun publishing her treatises, including The Ladies Directory (1662) which, as she assured her audience, contained “very choice Receipts…from…[her] own Practice.”[10]  As she expounded over a decade later, her authority stemmed from her own personal practice, having “been Physician and Chirurgion in my own House to many and also to many of my Neigbours, eight or ten Miles round.”[11]

Woolley’s training came from both her female family members and from her onetime employer who, along with books, “procured such knowledge for me from her Physicians and Chirurgions (who were the best that all England could afford).”[12]  Even so, Woolley was careful to include only simple cures with which she had experience and avoided giving advice regarding complicated cases because “there is in those cases a good Judgment required.” [13] 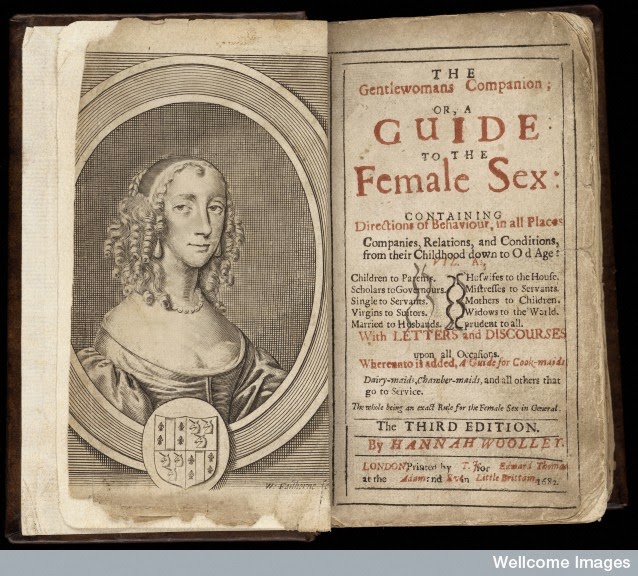 Here, it seems, she sought consciously to keep to the knowledge and expertise expected of her gender and avoid any potential problems with the reigning medical authorities.  This may have been a particular worry as Woolley advertised her sale of “several remedies for several distempers” and seemed, not too subtlety, to be advertising her services as a physician and surgeon.[14]  Indeed, she noted quite early in the text that she had cured a “young maid” who had “cut her Leg sorely,” a “man having a Pitch-fork run into the Corner of his Eye,” a boy with a head injury, and a woman with a cut lip.[15]

Despite this veritable plethora of surgical experiences, Woolley’s surgical advice lacks distinctly incisions, extirpations, and stitching – the manual parts of surgery that marked it as a craft in the eyes of the early modern people.  Rather, for wounds, she recommended washing with brandy, applying red rose conserves, along with a receipt for a application of oil and brimstone.[16]

Many of the ingredients Woolley recommended – rose syrups, honey, hare’s skin, eggs, brandy, various spics and local herbs – were easily accessible and affordable to many.  Even the frankincense recommended to staunch wounds could have been found at an apothecary shop.  Woolley’s directions and receipts were simple, easily performed by her female audience, and non-threatening to London surgical practitioners.

Indeed, the only moment where A Supplement to the Queen-like Closet suggests Woolley or her advice as a replacement for a surgical practitioner was a note that her plaister for gout cured a man “after all the Chirurgions had given him over.”[17]  Even so, while highlighting the efficacy of the treatment, Woolley was careful to point out that she treated the man only after his surgeons had given up on his case.