Pregnancy and childbirth were, potentially, terrifying prospects in eighteenth century England.  First came several months of nausea and physical distress, followed by decreased mobility and, eventually, the painful experience of childbirth.  After this painful ordeal women were typically confined to the lying in chamber for one month.

Pregnancy and childbirth were taxing on both body and mind – the threat of miscarriage, death in childbirth or even death during the lying in period loomed large.

It is thus not surprising that such an experience warranted both advice literature aimed at pregnant women and a plethora of treatises aimed at midwives and other such practitioners.  Doubtless though, the works published during the eighteenth century were more liable to confuse, rather than comfort, expectant mothers as they tended to offer conflicting advice. 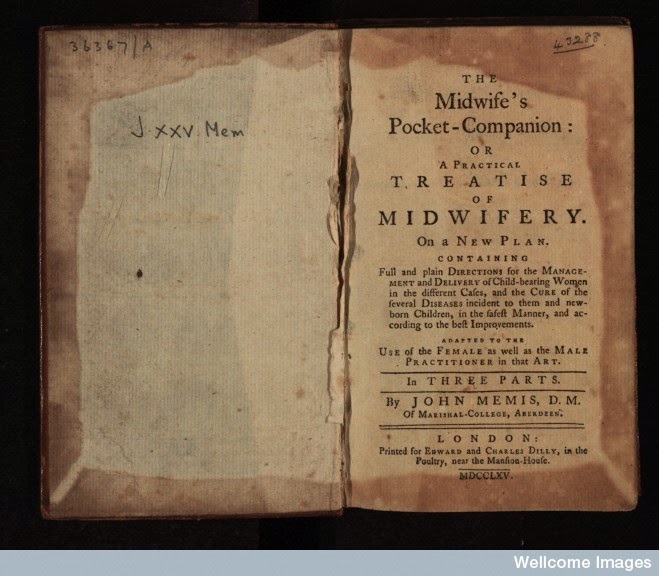 It is important to note that the texts were, largely, products of the midwifery professionalization debate and that this was reflected in the structure of texts and language used in them.  This post will be first part of two posts on eighteenth-century midwifery treatises.  The second post will address the battle for professional legitimacy by male and female midwives.

As Lianne McTavish has stated, “treatises enjoyed a diverse audience consisting of male medical practitioners, female midwives, pregnant women, lay people, and even readers in search of a sex manual.”[1]

Authors delineated who they thought to be their audience. Sarah Stone’s midwifery treatise, for example, stated on the title page that it was aimed at “all female practitioners.”[2]  Smellie’s A treatise on the theory and practice of midwifery was meant to “whet the genius of young practitioners, and be as hints to introduce more valuable discoveries in the art.”[3]

In the case of the advice literature, the intention and audience were typically stated together such as John Leake’s attempt to “afford women an adequate idea of their own disorders.”[4]  In contrast to these, Elizabeth Nihell addressed her text to both the pregnant woman and her husband as decision makers.[5]

Several treatises, however, stated that they were aimed at both pregnant women and practitioners.  Henry Bracken, for instance, hoped that his treatise would profit “men by the choice of skillful men or women midwife, and women by learning how to behave themselves, with respect to conception and during pregnancy” while stating that it was “not below the perusal of any one.”[6]  In addition Margaret Stephen’s work was aimed at both midwives and pregnant women while ignoring male practitioners completely.[7]

Related to the discussion of target audience is the issue of language use.  Perhaps inevitably, many of the writers who professed to write for female audiences stated that they would write as modestly and simply as possible.

Henry Bracken stated that chose an “easy and intelligible style,” while mentioning that he would have much preferred to write – as he would normally – to his peers, the men-midwives.[8]

The anonymous male author of The ladies physical directory wrote that:

to make this treatise as truly useful to the fair sex as I thought was absolutely necessary, I have been forced, tho’ with some reluctance to write in a very plain manner of all secret illnesses.[9]

Indeed, throughout the work, the author wrote without the medical jargon or subtleties liable to confuse a less educated or familiar reader.  Another anonymous text aimed at women used unadorned and frank language in discussing female anatomy and the disorders liable to women.[10]

The tone and language of these statements seem patronizing towards female readers. What is interesting, however, is the fact that female authors also made such comments.  Mrs. Wright, the midwife, stated that “few read large elaborate works, and many would be glad to receive instruction advantageous to themselves and their families from a small pamphlet.”[11]

Moreover, Wright included a glossary at the end of her work, explaining the meaning of terms she deemed “somewhat technical.”  Perhaps insultingly though, her list included such words as: adult, feminine, substitute and technical.[12]

Robert Erickson, in his work on British midwifery texts, noted that there was frequent debate among early modern authors about the propriety of frank discussions of sex and the sexual organs.  These writers, he stated, were “faced with the very real threat of prosecution for indecency and immodesty…[and] almost all of them undergo, in their ritualistic ‘Prefaces to the Reader’, a variety of apologetic contortions for the propriety of their language.”[13]

Erickson’s observation was quite accurate and a number of texts comment on the possible modesty of their readers.

In addition to this practice, William Smellie, for example decided to publish entirely separate works with case information and illustrations.  Rather than simply worrying about a female reader’s modesty, he feared that illustrations would “embarrass the student in the progress of his readings.”[14]  The texts devoted to tables and illustrations were replete with images that would not only embarrass the reader, but were likely to offend the modesty of many.

Predictably, such illustrations were quite rare in the sample of texts examined.

Indeed, only two other treatises included such titillating illustration.  The first, was misleadingly entitled Aristotle’s Master-piece.  The text – aimed at practitioners and pregnant women – was a conglomeration of writings from a variety of authors, indeed, later editions bore the name of famed astrological physician William Salmon.  The illustrations included in this text were titillating in a different manner.  Rather than anatomical figures, the text boasted sketches of ‘monstrous births’ and ‘hairy women.’

Surprisingly, however, the second text was penned by female midwife Jane Sharp.  The  illustrations must have been inserted in accordance with her wishes as they appear in earlier editions of the text that were published during her lifetime.  The figure in question was allocated a page of its own and buried within the text.  It depicted a naked woman, breasts exposed, with a partially dissected womb that revealed a fetus; the woman’s genitalia were covered by a flower.

As Sharp’s text was meant to be read by a female audience, the full-page sketch of a partially dissected, and naked, woman would have been likely to offend on several grounds.

So ends part one of my mini-series on midwifery.  Let me know what you think here or on Twitter – I’m @medhistorian.
[1] Lianne McTavish, “Blame and vindication in the early modern birthing room,” Medical History 50,4 (2006), 449-450.
[2] Sarah Stone, A complete practice of midwifery. Consisting of upwards of forty cases or observations in that valuable art, selected from many others, in the ... London, 1737.
[3] William Smellie, A treatise on the theory and practice of midwifery. London (1762), ii.
[4] John Leake, Medical instructions towards the prevention, and cure of chronic or slow diseases peculiar to women: especially, those proceeding from ... London (1777), 10.
[5] Elizabeth Nihell, A treatise on the art of midwifery, setting forth various abuses therein, especially as to the practice with instruments, London (1760), i.
[6] Henry Bracken, The midwife's companion, or, a treatise of midwifery: wherein the whole art is explained. Together with an account of the means to be used for ... London (1737), Preface unpaginated.
[7] Margaret Stephen, Domestic midwife; or, the best means of preventing danger in child-birth, London (1795), 3.
[8] Bracken, Preface unpaginated.
[9] Physician. The ladies physical directory: or, a treatise of all the weaknesses, indispositions, and diseases peculiar to the female sex, from eleven years ... London (1739), Preface unpaginated.
[10] Anonymous, The ladies dispensatory or, every woman her own physician. Treating of the nature, causes, and various symptoms, of all the diseases, ... London, 1740.
[11] Mrs. Wright, i.
[12] Ibid., 36.
[13] Robert Erickson, “‘The books of generation’: some observations on the style of the British midwife books, 1671-1764,” Sexuality in eighteenth-century Britain Paul-Gabriel Boucé ed., Manchester : Manchester University Press (1982), 74.
[14] Smellie, iii.
Posted by Samantha Sandassie at 11:46