Midwifery II: The Battle for Authority


You may want to check out Midwifery I before continuing...

How did the authors present themselves and their practice?  And second, how did they present practitioners of the opposite gender?

The male authors of the English treatises typically stressed their knowledge of anatomy as well as their practical experience to make their texts seem more authoritative.

John Maubray’s 1724 text was entitled The female physician and addressed to “all learned and judicious professors of physick, as well as ingenuous and experienced practisers of midwifery.”[1]  Maubray, unlike many other authors of the time, did not expound upon the successes of his practice.  Rather, he stated confidently that his work would stand up well on its own.[2]  Like many other male writers, he praised the work of male midwives for their knowledge of anatomy and “greater presence of mind.”[3] William Smellie’s 1762 text began with a long exposition of his achievements.  Arrogantly, he stated that he had “given upwards of two hundred and eighty courses of Midwifery, for the instruction of more than nine hundred pupils, exclusive of female students: and in that series of courses, one thousand one hundred and fifty poor women have been delivered in presence of those who attended me.”[4]  With such vast experience in the field it is no surprise that his texts were some of the most widely read and respected.  John Clarke, in contrast, simply had the fact that he was a physician and teacher of midwifery printed on the title page of his work.

When attacks were made on practitioners of the opposite sex, no criticism of their specific practice was made.   Rather, instead of case studies, the male writers used the power of language and invoked greater knowledge.  This is particularly interesting as these male practitioners were in the best position to print stories glorifying their actions while attacking those of “ignorant” midwives.

John Maubray provided the most subtle criticism of all the writers.  Instead of making negative comments about female midwives he stated that all practitioners – whether male or female – should be knowledgeable of anatomy.[5]  Though seemingly innocuous, many practicing female midwives had little or no official training.  Indeed, anatomical knowledge belonged to male scientists, physicians, surgeons and the like and to only a very few females.

William Smellie also used this tactic in his Treatise on the theory and practice of midwifery.[6]  Moreover, he anticipated that a female midwife’s patient may have need to be rescued by a male practitioner.  He urged the midwives to “avoid all reflections upon men-practitioners” and to not hesitate to call upon them when at a loss.[7]  While they expected that the female midwife be competent in anatomy, the male midwife – or accoucheur – needed to be competent in anatomy, surgery and physick.[8]

Likewise, the author of the The ladies physical directory (1739) The text, whose author was identified only as “Physician,” endeavoured to provide a female audience with the tools necessary to know when they should contact a physician.  This was necessary, he stated, because:

“those who chiefly undertake the cure of the secret indispositions of the female sex…are notoriously ignorant of them; I mean midwives, nurses and…other good women.”[9]

The anonymous author of The ladies dispensatory (1640) was just as negative in his opinion of female midwives, calling them “bad Councellors.”[10]  John Grigg also wrote negative comments, however, he limited his attacks to lower class female practitioners who possessed little education and thus provided poor or harmful advice to their patients.[11]

The female treatise and advice literature authors wrote in a surprisingly similar manner to their male counterparts.  Indeed, they used much the same language, tactics and arguments in favour of their practice.

Margaret Stephen noted that she taught anatomy to her midwifery students and had numerous patients.[12]  Sarah Stone wrote that she practiced midwifery in Taunton and was very experienced in delivering difficult births.[13]  Interestingly she was also the lone author examined who used cases to stress that her work was authoritative. 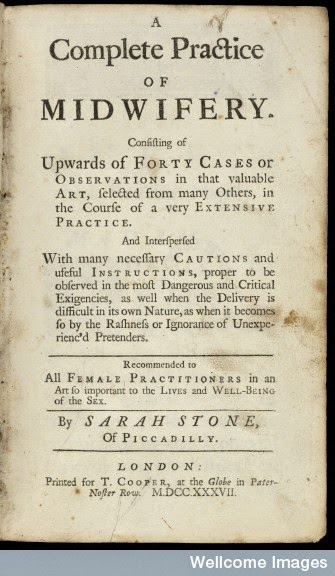 Indeed, Stone’s entire work consisted of upwards of forty case studies or observations of difficult births.  In most cases – though not all – Stone noted that the delivery was made successfully and both mother and child survived.  Both the male and female authors of the midwifery treatises sought to present their texts – and by extension their genders – as authoritative.

Despite differing qualifications, both male and female authors presented their practices in similar manners.  The first argument against man-midwifery was similar to that used by the male practitioners against women.  That is, the training and education received by male midwives.

Nihell, for example, stated that many men were practicing only after a short period of training.  Indeed, many men-midwives were “made out of broken barbers, tailors, or even pork-butchers.”[14]  Martha Mears, like John Maubray, provided the most subtle criticisms of other practitioners.  She took a slightly different view than Nihell and instead criticized the flashy trappings of male midwives.  These men, she stated, “come dressed out in a rich wardrobe of words, to dazzle their [the audience’s] attention.”[15]

Mrs. Wright, the midwife, also expounded upon the strengths and weaknesses of man-midwifery.  While men held a reputation for being more educated than women, they used potentially harmful instruments and worked quickly rather than waiting patiently for nature to take its course.[16]  Sarah Brown did not criticize men-midwives.  Rather, she referred to the “midwife” using both male and female pronouns interchangeably.[17]

These were subtle criticisms and the female midwives were frequently far more militant.  They criticized the practice of men-midwives on two main grounds: the use of instruments and the female modesty.

Elizabeth Nihell’s 1760 treatise was one of the first, aimed at the general public, to examine systematically the faults of men-midwives and defend it as a female profession.  Rather than elevating the female midwife as an experienced professional, Nihell’s text lambasted man-midwifery as harmful to both mother and child.

These men, she stated, have “added new and worse errors of their own to those bequeathed to us by the antients.”[18]  In particular, she attacked the use of instruments as:

“surgeons in form of men-midwives, have been the death of more children with their speculum metricis, their crotchet, their extractors or forceps, their tire-tétes, &c. than they have preserved.”[19]

Using the language of battle, she described these men-midwives as the “forerunners of murder,” cutting and slashing their way into the womb with iron and steel.[20]

Sarah Stone also attacked male childbirth assistants’ use of instruments.  She did not expound significantly and her criticism was limited to a short, yet descriptive statement: “infants have been born alive, with their brains working out of their Heads: occasion’d by the too common use of instruments which I never found but very little use to be made of, in all my practice.”[21]

Though the use of instruments has been long considered the defining difference between male and female practitioners at this time, more recent scholarship has shown it to be only one of several distinctions.  Indeed, Stephen admitted to using the forceps on occasion and even taught it to her pupils.[22]

The use of instruments was not the only battle fought in this war for dominance in the field.  Sarah Stone lambasted her female peers for having to call men-midwives for help, summing up her observation of the common phenomenon, she stated:

“I cannot comprehend, why women are not capable of compleating this business when begun, without calling in of men to their assistance, who are often sent for, when the work is near finish’d; and then the midwife, who has taken all the pains, is accounted of little value, and the young men command all the praise.”[23]

Like the male writers, she called for midwives to become more acquainted with anatomy and “the difficult part of [this]…business.”[24]  Unlike the male practitioners, however, this evidently stemmed from the fear “that the modesty of our sex will be in great danger of being lost.”[25]

Margaret Stephen also worried about the mother’s modesty, reminding her readers that females had, as recorded in the Bible and throughout history, been the attendants of birth.[26]  Indeed, she believed that women, and not men, were mandated by God to aid in childbirth.[27]  In keeping with Erickson’s comments on female modesty, if one could not safely publish information about sexual matters, how could physical contact between a male physician and a female patient be considered appropriate?

The most interesting finding was that the female midwives had adopted the language and style used by their male counterparts.  Indeed, in some instances, they used the same arguments!

The debate between male and female midwives was quite active in the eighteenth century.  Men-midwives did not simply run roughshod over their female counterparts.  Indeed, women writers were frequently just as caustic in defending their practices and criticizing those they saw as encroaching on their traditional field.