Invasive operations – its accompanying pains and potential complications – gave early modern surgeons and surgery a somewhat negative reputation.  Surgeons belonged to an ignoble profession, one joke noted, because they made a living “by the hurts of other men.”[1]

Despite this characterization, surgeons – along with barbers and apothecaries – provided the bulk of day-to-day medical advice and treatment at this time.  Physicians were few and too expensive.[2]

Surgeons were even more important and necessary on the battlefield.  Indeed, seventeenth-century soldiers and naval men were treated almost exclusively by surgeons rather than physicians.

The almost continuous warfare throughout the period provided surgical practitioners with numerous opportunities for state service and a plentiful supply of wounded men to treat.  War contributed significantly to surgery’s growth in terms of both organization and practical techniques.

In addition to honing their skills, war encouraged surgeons’ creativity as they sought better ways to treat wounds rather than relying on older and accepted knowledge.

Ambroise Paré, for example, discovered the use of ligatures in amputations, researched amputation’s effects, and even designed prosthetics.

As early as the 1530s, Paré admitted to searching actively for other methods to treat gunshot wounds, and moreover, that both himself and other surgeons knew to use suppuratives rather than boiling oil due to their wartime experience.[3]

It was Paré, famously, who popularized the idea that gunshot wounds were not poisonous and that the wounds did not need to be cauterized.  He was, in particular, moved by the pain his patients suffered – those cauterized with hot oil suffered from fevers and “great pain” due to inflamed wounds.  Viewing them with horror Paré “resolved with my selfe, never to burn so cruelly the wounded Patients by Gunshot any more.”[4]

The infamous boiled puppy recipe was given to Paré by a surgeon in Turin and required:

“two young whelpes, one pound of earth-wormes, two pounds of the oyle of Lillies, six ounces of the Terebinth of Venice, and one ounce of Aqua-vitae: and in my presence he boiled the whelpes alive in the saide Oyle, until the flesh departed from the bones. Afterward, he tooke the wormes (having before killed and purified them in white wine, to purge themselves of the earth which they have always in their bodies) being so prepared, he boyled them also in the said Oyle till they became dry, this he strained through a Napkin, without any great expressions, that done, he added thereto the Terebinth, and lastly, the Aqua-vitae, and called God to witnesse, that this was his Balme which is used in all wounds made by Gunshot.”[5]

Though Paré was well known and his work widely disseminated, it is unknown just how popular his puppy cure came to be.

On 23 October 1642, at the Battle of Edgehill, a soldier named Christpher Wally was shot with a pistol just an inch above the clavicle on the right side of his neck.  The pistol ball traveled into his mouth, embedding broken teeth into his cheek and damaging significantly his jaw.  The damage was so severe that when Wally drank broth, it “come out at his wound in ye necke soe as when he dranke he put his fingers on the wound.  Incredibly, as surgeon Joseph Binns related, Wally survived after being bled, his wound dressed, and given numerous liquids to gargle.  Wally was recorded as cured on 20 December of the same year.

In 1662, English surgeons Joseph Binns, Thomas Hollier, and Thomas Arris treated the son of a fourth surgeon, one Mr. Dickson, who had been shot with a musket in the arm.  The musket ball traveled up the man’s arm and “fractured all the bone to peeces.”  The patient was dressed with various herbs including sage and wormwood, various infusions in alcohol, was bled, and given a glister.  He too survived.

Roughly 130 years after Paré’s The Method of Curing, Richard Wiseman would repeat a similar puppy cure in his Several Chirurgical Treatises.[6] 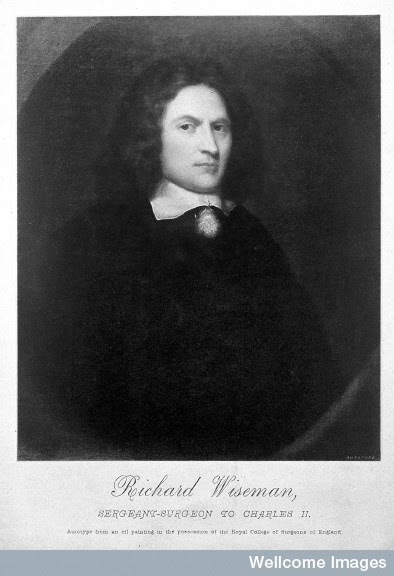 Wiseman was easily one of the most important English surgeons of the early modern period.  His mammoth treatises, years as a naval surgeon, and time at Charles’s side during the English Civil War make him an intriguing figure.

Like Paré before him, Wiseman believed that a combination of experience and accepted knowledge was key to a successful surgical practice.

Though his contributions to surgery do not compare to Paré’s innovations, Wiseman’s many publications included over 100 case studies in A Treatise of Wounds (1672) and roughly 600 case studies in Severall Chirurgical Treatises (1676).

These case histories or observations were an important part of communicating surgical innovations and reflects neatly the new science’s emphasis on experiment and experience.  Cases such as these helped showcase surgical knowledge and disseminate it to other surgeons, physicians, and natural philosophers.

It was one of the many ways in which surgical practitioners could gain occupational and personal credit.

As I’ve written about here, styptics – external medicines that staunched the flow of blood – were an integral part of the army surgeon’s chest and a matter of some debate in the seventeenth century.

Though he did not develop or test the so-called “Royal Stiptick Water” on the battlefield, Wiseman experimented with it and described its effects in the Phil. Trans. for the benefit of other army and naval surgeons.

Tales of the liquid styptic reached English shores through the Philosophical Transactions of the Royal Society.  In 1673 Jean-Baptiste Denys, the personal physician to Louis XIV, wrote to the journal from Paris and related the experiments he made on dogs and men to test the styptic’s efficacy.[7]  Intrigued by the letter, Wiseman and Dr. Walter Needham requested samples of the liquid with which to perform their own experiments.

Combined, the men performed six separate experiments on dogs, calves, and, spontaneously, on one human.  Unlike Denys’ brief letter, Wiseman and Needham’s notes to the journal were quite extensive and included details of how and where incisions were made, how the styptic was applied, and the outcome of the process.[8]

The royal styptic was tested privately by Wiseman and Needham, before members of the Royal Society, and at Whitehall by the king’s command.  The repeated testing was not a sign that the men sought replicability of results.  Indeed, the initial private test was on a dog, the styptic’s use on a female patient was entirely unplanned, the experiment before the Royal Society was also on a dog, while the experiment before the king was made on two calves.[9]

Indeed, Wiseman was not prepared to perform an experiment on humans at the time and he ended up lightly cauterizing the wound with a hot iron and using tight bandages in addition to using the styptic.

These were not carefully the controlled experiments of modern science.  At no time did either Wiseman or Needham suggest that the tests’ parameters needed to be controlled or even comment that the slightly different results of each test was significant.  Rather, they noted that the styptic was effective because the dogs and calves were “still found alive and well” and “went away without any bandage.”[10]

The experiments’ steps, it seemed, were recorded more to lend authority to the account rather than as a guide to further experimenters on what to expect.  Indeed, it seems more likely that the details were included to allow readers to become virtual witnesses.

In the same way, Wiseman and Needham witnessed the experiments together, then with the Royal Society, and then it was again witnessed by the king and “several” of  his physicians and surgeons until “his Majesty himself declared publickly to be very well satisfied with it.”[11]

Monarchical approval – from both sides of Channel – lent Denys’ styptic significant cachet.  Indeed, it was the royal stypic.

Battle wounds, especially from gunshot, were exceptionally deadly and uncontrolled bloodless a major worry.  War forced early modern surgeons to experiment and innovate.  From puppies to liquid styptics, they sought less painful and more effective methods with which to treat their patients.