"Death In The Pot!" Part II

About almost 15 months ago, as I sat with my husband and our friends, I declared that I was going to start a history of medicine blog that was going to be awesome.  I had no idea what I was going to write about, if I could write for a non-academic audience, or even what a blog platform was.

What I did have was a Word doc with a long list of potential blog names and Twitter handles.  Honestly, they were all really bad.[1]

Then one day, as if by magic, a horrible açai berry juice infomercial played just as I was reading a 17th century advertisement for a “Herculean Antidote Against The Pox” – and everything else – that was truly “infallible.”

It was kismet.  From then on, I was pretty insistent on “Panacea.”

In the past year, Panacea has had roughly 40,000 visitors from Alaska to Zambia and all the places in between.  I’ve had comments and emails from teenagers doing high school projects to fellow academics and everything from hate mail to guest writing and speaking requests.[2]

It’s been fun and I hope you’ve enjoyed reading as much as I’ve enjoyed writing and tweeting.  I’ve met some truly wonderful people via Panacea and Twitter and look forward to what the next year will bring.

For those who were curious, the most visited posts have been (in order): Surgeons At War, Drinking Bath Water, and Putting A Stopper In Death.

And now to Death In the Pot Part II: 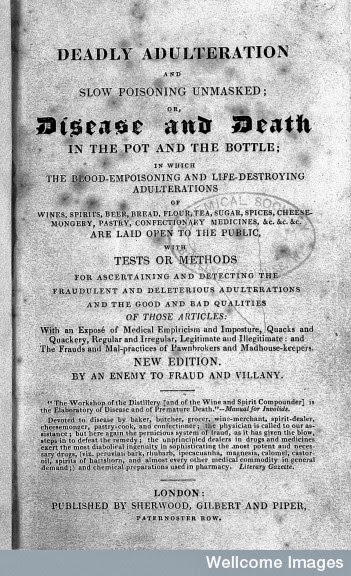 As Part I revealed, 19th century food adulteration was a big deal for both popular press and scientists.  The press, scientists, and physicians alike stressed the harmful nature of the adulterants used in foods and campaigned for better legislation.

For their efforts, however, scientists such as Fredrick Accum were soon faced with accusations of alarmism.  Indeed, Accum was harried out England by 1824 (only four years after A Treatise was published) and his work was “widely regarded as exaggerated.”[3]
Such criticisms meant that scientists and physicians had to be more careful when discussing the subject. By mid-century, scientists and medical men – though still lobbying for increased legislation – curbed their gloomy and calamitous reports.

This linguistic turn to more measured language, I think, played a great role in 1) returning some measure of authority to scientists and 2) popularizing science.

Indeed, the public thanked science, not politicians, when the 1875 Sale of Food and Drugs Act (SFDA) was introduced to regulate the retailing of adulterated goods.  The Act allowed “local authority officials to inspect and take samples for analysis from retail outlets” before it reached the consumer.[4]

The Act was the culmination of decades of lobbying by scientists, popularizers, and the public alike:

Thomas Wakley’s Lancet, for example, printed names of both adulterators and seller of pure merchandise.[5]  Partly because of the furor stirred up by the Lancet, an 1855 Select Committee of the House of Commons was appointed to examine the issue of food adulteration and recommend legislative changes to the Parliament.  Moreover, they recognized that science had a key role to play, and of the sixty professional witnesses called, fifty percent were physicians, surgeons, chemists or druggists.[6]

Science, not the law, was seen as authoritative in matters concerning food adulteration.  Treatises were frequently reviewed and recommended, and sections were reprinted frequently in the popular periodicals.  One author recommended that his wife and other “maters-familias,” curious about food adulteration, could find “enlightenment…in the Reports of the Analytical Sanitary Commission.”[7]  Indeed, though a scientific text, it was thought to “serve to assist the most unscientific reader in detecting the difference between the counterfeit and the genuine article.”[8]

Authors of these scientific works examined seemingly embraced the role given them by the public.  Indeed, in some cases, they could be accused of vigilantism in the way they sought out and attacked those guilty of adulteration.

In 1851, the Analytical Sanitary Commission received one of the highest compliments it could be paid - it was caricatured in Punch.  The often irreverent magazine praised the Commission, calling it the “Scientific Detective Police,” and stated that “if any of the knaves thus pilloried in the Lancet, abetted by a disreputable attorney and a dishonest barrister, endeavour to avenge themselves through the technicalities of the law, Punch hopes they will meet with twelve true men in the jury-box who will scout both them and their legal accomplices out of court.”[9] 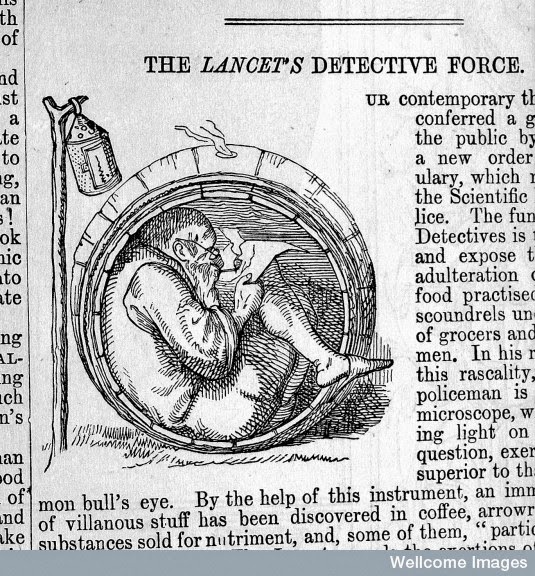 Though the Lancet was a radical, reforming periodical, one question still remains: why did the issue of food adulteration encourage such outrage and even mild vigilantism in the scientific sphere?

The answer, perhaps, lies in the recognition – made as early as Accum’s text – that some of the blame lay at science’s door.  Accum criticized the chemists who supplied drugs to brewers and grocers and stated that it was “lamentable that the extensive application of chemistry to the useful purposes of life, should have been perverted into an auxiliary to this nefarious traffic.”[10]  Cameron also made note of this relationship, stating that “as chemistry advanced, it unfolded new secrets… [and] at the same time gave a larger scope for the adulterators, and pointed out new sources for more effectually disguising any alteration in the article, and rendering the sophistication almost imperceptible.”[11]

This was especially reflected in the popular texts that, as one stated, saw Hassall glorified and Accum forgotten.  Indeed, the author wrote that “the microscope alone is capable of detecting at one operation the nature and extent of the more harmless but general of…frauds.”[12]  Again, in Chambers’s journal, one article stated that “chemistry was well known to be inadequate to the exact examination of the majority” of adulterants.[13]

Perhaps this was also caused as a byproduct of the Lancet and Hassall’s publications.  Hassall mentioned frequently that his investigations were done with a microscope.  Indeed, he was “the first to exploit it systematically and quantitatively”[14] and illustrated his reports with woodcuts depicting the adulterants. 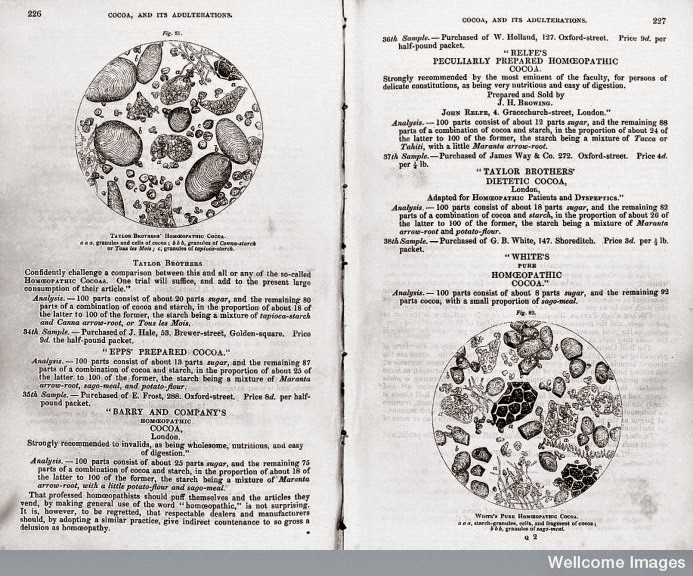 In general, though, it is evident that the food adulteration crisis had a positive effect on the way science was viewed by the public.  Reynold’s journal advocated the ownership of a microscope, stating that it was quickly becoming fashionable as well as practical.  Indeed, the article stated that “no better exercise could be found for the young microscopist than testing the eatables from the pantry” and that with some help from Hassall’s woodcuts, even the “dullest” would be able to readily identify adulterants.[15]

Microscopes were being advertised for public use and specifically for detection of food adulteration.  One advertisement stated that the microscope would show “all kinds of Animalculae in water, circulation of the blood, &c &c., adulteration of food, milk, &c., and is just the microscope that every surgeon, dentist, schoolmaster, student, and working man should have.”[16]

Though chemistry was criticized as less effective than microscopy, it too gained a some favorable public support.  One Illustrated Review article reviewed a new organic chemistry text for students.  In the review, the author noted that the work was very useful as “considering amongst other things, the work which the Adulteration of Food Act 1872 will give to the chemists we may expect a large demand for elementary manuals of this type.”[17]

Once again, science was able to provide what the law could not: the popular texts saw it as the authority and the professional scientists embraced their role.  Throughout all this, it is evident that microscopy and chemistry, though more so the former, had earned the esteem of the people.  Moreover, they were encouraged and recommended as activities for the public.

Though full of tragic tales, the epic of Victorian food adulteration ended with an aware – not to mention healthier – public.