From Orient to Occident Part I: Acupuncture in Victorian England


Around this time a couple years ago I sneezed and threw out my back.  I began the usual ice treatment while moving gingerly and trying vainly to hide my embarrassment at this new physical low.[1]

With some urging, I visited a massage therapist and acupuncturist later that day.  The massage was certainly not relaxing (but it did help with acute muscle pain) and I consented to an acupuncture session thereafter.

The needles were very thin and flexible and inserted at various depths across my back.  My natural disinclination to be stuck with needles meant that I was hyperaware of the acupuncturist’s actions.

The initial insertion was just a slight prick and some (perhaps all?) were tapped or twisted.  With the needle manipulation came a steady stream of questions. “Is this uncomfortable? Does this hurt? What does this feel like?”

The sensation was quite odd.

After a few minutes, some of the areas with needles inserted felt warm and heavy as if something was resting on my back.  After a few minutes more, however, the comfortably warm heavy feeling was replaced by vibration, a bit of pain, and then my acupuncture session was over.

In our modern, globalized world, it doesn’t seem particularly strange that a Caribbean-born person could undergo an Oriental medical treatment in southern Ontario.

But how and why did acupuncture become en vogue in Victorian England of all times and places?

Acupuncture’s origins lie in the East.  Rough acupuncture needles, hewn from rock, and dating to the Stone Age have been found in China and Mongolia. Pictographs depicting both acupuncture and moxibustion date from the Shang dynasty, while detailed written records date from about 300 BCE.

From there, it was first introduced to Europeans by missionaries in the fifteenth century but did not experience the first of its popularity peaks until the early decades of the nineteenth.  The first detailed account of acupuncture in the West, was that of Dutch physician and botanist Wilhelm ten Ryhne at the end of the seventeenth century.  It is from De Acupunctura that we get the modern term acupuncture, meaning, to pierce the skin.

Though published in London, ten Rhyne’s book and other accounts, piqued the interest of the French before acupuncture was considered with any seriousness by those across the Channel.  Indeed, the English largely ignored acupuncture until James Churchill published A Treatise on Acupuncturation in 1822.

News of the French experiments and Churchill’s treatise sparked the British interest in acupuncture.  While popular interest did not reach the levels attained by the less exotic pseudosciences like mesmerism or phrenology, over 45 popular journals published in London, Edinburgh, and Dublin mentioned acupuncture during the nineteenth century.

These periodicals range widely from literary magazines like Charles Dickens’ All The Year Round to religious journals like the Journal of Sacred Literature to more general periodicals like Monthly Magazine and the Quarterly Review. 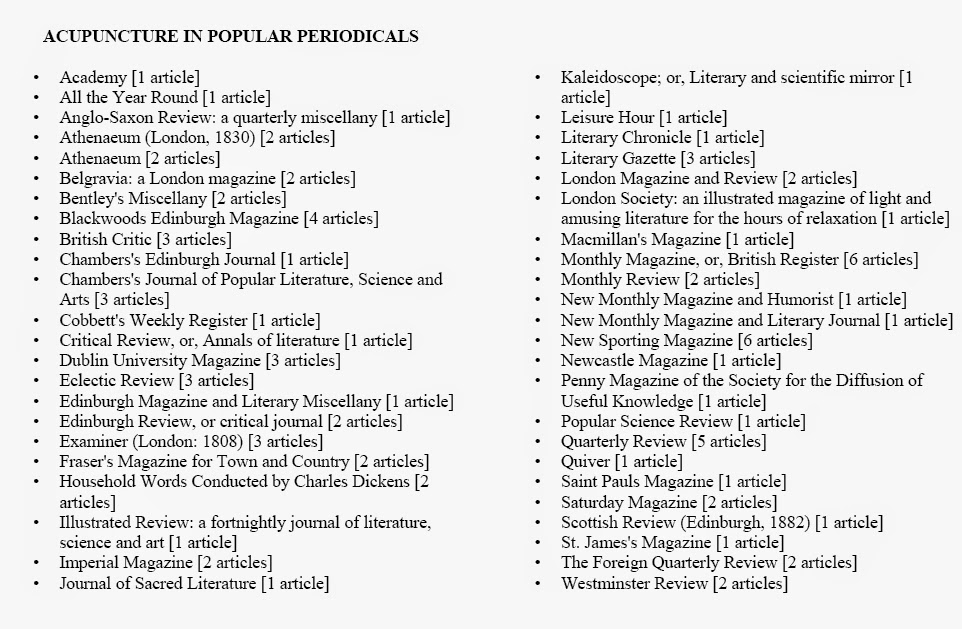 Though acupuncture articles accounted for only a tiny portion of the those read by Britons, it is clear that the term and its meaning had entered the general lexicon. Beginning in the late 1820s, the words ‘acupuncture’ and ‘acupuncturation’ were worked into poems and other fictional narratives.

Interestingly, only a minority were medical in nature.

Acupuncture was likened to a bee sting and to a jockey’s spurs on his horse; it was even brought into the political arena when George Grote declared that England was governed by “political acupuncturation.”  Overall, acupuncture, as practiced by Europeans, was portrayed positively in popular journals.

The radical physician Thomas Wakley and his journal The Lancet played a significant role in establishing acupuncture as a medical treatment. 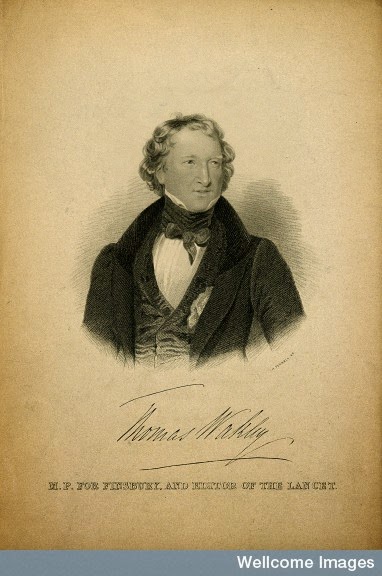 Wakley wanted The Lancet to be a radical, anti-establishment medical journal that would be bold and encourage scientifically proven treatments.  The journal was to be a complete chronicle of current medical literature, furnishing the medical practitioner with a test by which he could detect and expose ignorant practitioners and practices.

Perhaps most important, Wakley sought to expose the corruption of the reigning medical authorities, the established schools, and the hospitals and encourage a medical reformation.  It is Wakley’s dedication to the professionalization of medical practice that shines through in the earliest issues of the periodical.

The articles included in the publication declared its affinity for scientific experimentation and eventually the periodical became known for its scientific and social ideas, innovation, and inclusiveness.

The sixth issue of The Lancet included an article entitled “Acupuncturation” that reported on the success of the therapy for a variety of ailments.  In keeping with the periodical’s professionalizing agenda, it stressed acupuncture’s long history and strongly encouraged further experimentation stating that “the facility with which acupuncture may be used, leads us to hope that this remedy may meet with a trial from many intelligent practitioners, who may give to the profession a fair and important result of their observations.”[2]

The importance of eye-witness observation of experiments was also emphasized as the author described in detail a soldier’s self-treatment by inserting four needles near his stomach.[3]

During the 1820s, The Lancet detailed conventional medical cases such as paralysis, lumbago, rheumatism, and sciatica that were treated successfully by acupuncture.  Perhaps, in part, due to the encouragement provided by the periodical, the treatment was being used more frequently in cases involving muscular and back pain.

An 1826 Lancet article by Dr. T.W. Wansbrough detailed seven successful case studies of which he was witness.  In keeping with Lancet goals and the previous calls for professional trials, Wansbrough stated that after acupuncture came under his notice, he “resolved to give the operation a fair trial in every instance wherein its use should be indicated.”[4]

Wansbrough described the cures in extraordinary detail.  A 50 year old man, Mr. A.W., for example, was described as “corpulent” and suffering from lumbago.  Needles were inserted into his back with precision and “the operation lasted about five minutes.”  Thereafter, “Mr. W. then got up and dressed himself, expressing the greatest astonishment at what he termed the ‘magical effect of the needles.’”[5]

In yet another case, the female patient, skeptical of the treatment was cured of her lumbago pains in only four minutes – so swiftly that she “could scarcely credit the evidence of her senses.”[6]

After observing its efficacy, Wansbrough became one of the leading advocates of acupuncture.  This was, however, despite the fact that he had no idea how it functioned.  Indeed, he believed it to “depend on some of those mysterious operations of nature that will ever be beyond the reach of human ken, and which by consequence constitute the ne plus ultra of physiological research.”[7]

Here, acupuncture proves to be an interesting and unique case.  Wakley and the Lancet continued to support the use of acupuncture despite not knowing it worked on the one hand, while castigating mesmerism and homeopathy for the same reasons on the other!

Acupuncture even became one of the many issues involved in the verbal sparring between the College of Physicians and the Thomas Wakley.

The practice was criticized in 1827 by Dr. Grant Yeats at the prestigious Croonian Lecture hosted by the Royal Society and the Royal College of Physicians.  Yeats had classed acupuncture with the stethoscope, metallic tractors and phrenology, calling them “ephemeral follies.”

Wakley’s response was swift and vicious, castigating the College and accusing them and Yeats with displaying appalling “ignorance and bigotry” while citing the published successful case studies as exemplifying “in a most remarkable degree, the efficacy of acupuncturation, a remedy which, in despite of the sneers of certain learned sages, has come into general use.”[8]

The 1820 and 1830s were the peak of traditional acupuncture’s popularity in nineteenth century England.  The articles published at this time detailed the cure of ailments for which acupuncture is typically associated, and most of the cases demonstrated that the cures were done in the traditional method described by Chinese and Japanese texts.

This, however, changed dramatically during the following decades.  Perhaps in response to the periodical’s encouragement, and in part reflective of the push to entrench science within medicine, acupuncture was soon used for an even greater variety of ailments and in ways considerably different from that practiced in the Orient.

The next Panacea entry will continue the story of acupuncture in Victorian Britain and explore the treatment’s transformation over the next 50 years and how, despite it’s mysteries, it was never (in the Lancet at least) placed on the same level as other popular and baffling treatments such mesmerism and homeopathy.