What's Old Is New Again: Medicine's Blast From the Past


And don't throw the past away/
You might need it some other rainy day.

'Cause everything old is new again.

Or so go the lyrics to Peter Allen’s “Everything Old is New Again.”

Cow Bile & Onions for the Eye

Recent findings by an interdisciplinary team of scientists and Dr. Christina Lee, a scholar of health in Anglo-Saxon England, suggests that Allen’s lyrics may apply to medicine as well.

Bald’s Leech-book, aka the British Library’s MS Royal 12 D (see also Harley MS 55, ff 1r-3r), has been a matter of scholarly interest for some time.  Compiled in the mid-10th century, possibly in Winchester, the manuscript contains a variety of medical receipts and a description of how to surgically fix a harelip or cleft lip.[1]
Lee translated an eye-salve receipt which was then recreated and tested by a team of microbiologists.  As several news articles revealed, the simple salve of garlic and leeks/onion, wine, and cow bile proved extraordinarily efficacious against MRSA or methicillin-resistant staphylococcus aureus.

The BBC article on the discovery concluded that “it seems Anglo-Saxon physicians may actually have practised something pretty close to the modern scientific method, with its emphasis on observation and experimentation.”

Those who have read my work, sat in my classrooms, or know me can guess how I reacted to that rather condescending statement.[2]

Let’s take a look at some other nonsensical sounding treatments that are still sort of used today, shall we?

John Hester’s The Pearle of Practise includes a number of very odd and very noisome sounding treatments.  The book sometimes reads like a compendium of horrifying and odd things like treating gout with the wax dripping off a roasted puppy that has been stuffed with black snails and rubbed with saffron.[3]  Or prognosticating whether or not someone would die of the plague by laying a frog on their belly.[4]

Or the case of an empericke practitioner who cured cancer with “centumpedes” found in English pigs.  These creepy bugs were mashed in ale and consumed causing “a certaine black bugge, or worme to come forth [from the cancerous body] which had many legs, and was quicke and after that the cancker would heale quicklie, with any conuenient medicine.”[5]

Or curing shingles with a plaster of barley, vinegar, and doves dung.[6]  I could probably go on for a while.  Like I said, a veritable compendium of odd things.

One of the treatments that caught my eye, however, simply stated that in cases of the flux or diarrhea, “diuerse Souldiars in the warres haue beene cured thereof, by setting their fundament in warme Horse dung.”[7]

Sounds about as useful as the centumpede cancer remedy, right?

So have you heard about fecal transplants?

Fecal microbiota transplants or FMT is exactly what it sounds like: the insertion of foreign fecal matter into a patient – through enemas, pills etc. – to treat C. difficile (stomach pains & diarrhea), colitis, and irritable bowel syndrome to name a few.

A Hole in the Head

Trepanation inevitably comes up when I’m asked about terrible early modern surgical procedures. It involves drilling a hole into the skull so deeply that the membrane surrounding the brain is exposed.

We have archeological and textual evidence of prehistoric and premodern trepanned skulls from Asia to the Americas.  Surprisingly, trepanation wasn’t necessarily a death sentence either – many patients survived and their skulls show signs of healing.[8]

But why would anyone need a hole in their head?  Trepanation was sometimes used to treat seizures, skull fractures, migraines, and madness.  The hole was thought to release pressure

Along with amputation, trepanning was one of the most visibly violent and extreme operations a surgeon could perform.

The German surgeon, Johannes Scultetus, for example, included a very detailed series of numbered images of a skull being trepanned with additional text.[9]  Both early 18th century writers, Charles Le Clerc and Belloste also included figures with their description of trepanation.  Le Clerc’s image depicts the many layers of bandages he deemed vital to dressing – and thus curing successfully – a trepanned skull.[10]  Belloste also depicted an innovative thin lead plate he used to improve the trepan process by decreased risk of sepsis.[11] 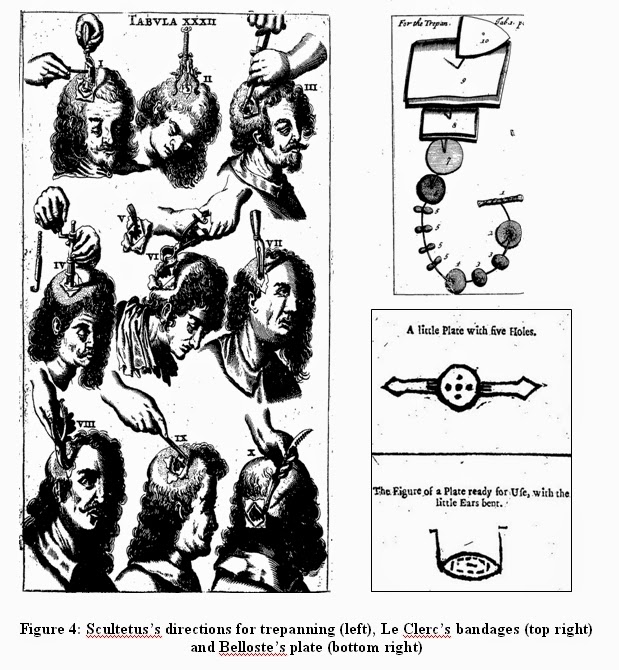 Trepanation underwent something of  a revival in the mid-20th century.  Bizarrely, self-trepanationists such as Bart Hughes advocated the procedure to increase blood flow to the brain and reach a higher state of consciousness.[12]

Today, however, modern surgeons rarely recommend trepanation except in cases of subdural hematoma.  Generally caused by head trauma, blood collects below the dura and increases pressure on the brain – trepanation just releases the pressure, the blood is suctioned out, and the skull piece is (usually) replaced promptly.

There are a few more: maggots are now used to debride wounds, leeches are used in reconstructive surgery, and the medieval practice of variolation directly led to development of the smallpox vaccine.

Who knows what the past has in store for us?